Reading Hansel and Gretel Does Not Make You an Expert

As Vincent Vega said, “things are just a little bit different over there.” Vince was a hitman in the film Pulp Fiction. He was talking about the Netherlands, but the same is said for most of Western Europe. Life is very similar to life in the United States, but there are subtle differences. “They do not have round doorknobs” is an oft-quoted minor variation.

Most Americans have a specific stereotype when we think of Germans—an image of people sitting around in lederhosen whilst drinking beer and eating Black Forest cake. Actually, if they really did that most of the time, I would apply for citizenship. But most of those preconceptions are based on small areas of southern Germany. There is a whole lot more to Deutschland.

The US had a huge influx of German immigrants during the course of its history, and it is a popular tourist destination for Americans traveling abroad. And there is of course Hogan’s Heroes to teach us the things we don’t know. We tend to think we have Germany and the Germans down pat. You think you know Germany? Here are ten interesting facts you probably did not know.

Germany is known for its thick forests, alpine views and flowery meadows. But did you know they also have some of the finest beaches in Europe? The nation is bordered by not one, but two seas; the Baltic and North seas. In fact, they have so much coastline, they have a formidable navy.

The water along the beaches near the Baltic are particularly noted for their pristine water. So why don’t tourists flock to them and why haven’t you heard of them? It’s because the summer weather is rarely beach weather. There are summers in which the temperatures and cloud cover keep the locals in jackets all season long. When the weather is good, Germans in the north pack the beaches.

Warenmunde and Timmendorfer on the Baltic along with Westerland on the North Sea are popular and well known among the Germans.

Sunday is family day in Germany; a day of rest and relaxation. How can you rest when your neighbor is doing some noisy DIY project? Call the cops. Many activities that make loud noises are illegal on Sunday, including include using a power drill or tossing bottles into the recycling bin. Those Germans take Sunday seriously. 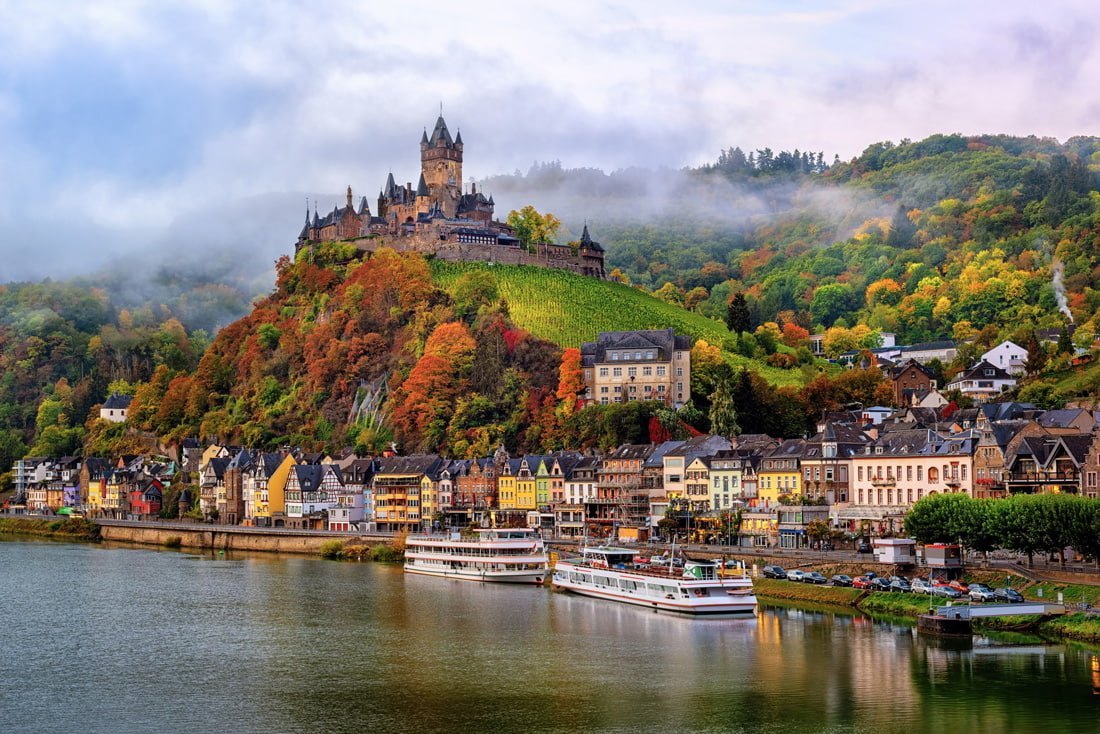 3. Hamburg Has an Extra H

One of the German abbreviations that is instantly recognizable is HH. The double letters have stood for the city of Hamburg for centuries. The most likely place you will find it is on the license plates of vehicles registered in the city of Hamburg.

German license plates have a system of letters to indicate where the vehicle is from. A single letter indicates one of the major cities; S is Stuttgart, M is Munich and so forth. Two letters are for medium-size towns, BZ for Bautzen for example. Three letters can indicate an even smaller town or an area, GMN for Grimmen for instance.

Hamburg is one of the largest cities in Europe, yet it’s license plate begins with HH, as many other things associated with the city. Why is that? The HH stands for Hansestadt Hamburg. Hansestadt means it was one of the free cities (in which cities operated like countries) several centuries ago, that belonged to the Hanseatic League. The Hanseatic League was a mutual trade and defense confederation among regions of northern Europe, chiefly along the Baltic and North Seas. Sometime during the formation of Germany from small kingdoms, Hamburg decided to keep its designation. Perhaps for nostalgic reasons.

4. It Has Part of Austria Surrounded

The southern border of Germany is mountainous. It is the northern slope of the Alps. The craggy mountains can often mean getting from point A to point B takes some serious navigating. It can also cut you off from your parent nation. The Austrian village of Jungholz, through geography and centuries of land purchases, is sort of like a button hanging from a thread. That thread is the only thing connecting it to Austria; the rest is completely engulfed by Germany. And that thread is super small and at the top of a mountain. This means you cannot enter or leave Jungholz, Austria, without passing through Germany.

While the town maintains its Austrian identity, it is more German than Austrian. It is so cut off from its parent nation that, before the common Euro currency came along, it used the German Mark for commerce and also the German postal system. If you are in Austria and want to get to Jungholz and they say, “you can’t get there from here,” they mean it.

5. No Preservatives in Beer

Germans are known for a few things that they excel at. Brewing beer is one of them. Did you ever wonder why German beer tastes so good? One of the major reasons is the Rheinheitsgebot, which means purity law. It states that only barley, hops and water can be used in beer (yeast being part of the brewing process). Preservatives, which can affect taste (and add to a wicked hangover), are not allowed.

The law was enacted in 1516, and Germans have had great beer ever since. That also means beer can go bad after a few months, but it tastes so good that that’s rarely an issue.

6. Berlin Is the Second Turkish Capital

Or so the Germans say. This stems from the guest worker program of the ’50s and ’60s that helped Germany fill vacant work positions. Germany soon became a top migration destination for Turks. As a result, today, Berlin has the largest Turkish population of any city outside of Turkey.

7. BMW Started as an Aviation Company

The translation for BMW is “Bavarian Motor Works.” The company is known worldwide for producing highly engineered automobiles and motorcycles that are regarded as some of the best in the world (and they have the price tag to prove it).

It began in 1916 as a manufacturer of aircraft engines and produced the same from 1917 to ’18 and again from 1935 to ’45. The BMW logo was designed to represent an aircraft propeller and still does to this day. 8. They Have Distinctive Regional Accents

In the United States, it is easy to understand the wide variety of English accents around the country. The difference between someone from Brooklyn and someone from rural Georgia is immense. But there is also a lot of geography between the two. Therefore, it is hard to comprehend that Germany, a nation the size of Montana, would have numerous and very distinctive accents.

The Germans in the north speak High German, which is closest to pure German. In the south, particularly in Bavaria, they have a more sing-song way of delivering words and compared to the north it seems slightly slurred. In the southwest, there is also Swabia, an area with an accent so muddled even many Germans cannot understand the natives. Near the border with Denmark, there is a variant called Plattduetsch, which some describe as a mixture between English and German. There are also other, less noticeable dialects. For its small footprint on the planet, Germany has a wide variety of accents.

9. They Have a TV and Radio Tax

Americans tend to take TV and radio for granted. Broadcast television and AM/FM is free. All you need is a device to capture the signals. We assume that the incessant advertising featured on both TV and radio pays for their operations, and we reap the benefits. Germans are not so lucky.

The German government taxes 18.5 Euros per month per household. While not as pricey as American cable, it still adds up over time. The tax is used to support German public radio and television. While not commercial-free, they are limited to how much advertising they can run. Not having a TV or radio or both does not exempt one from having to pay the tax. A nationality trait to be admired is how much the Germans try to take care of the environment. They recycle like nobody’s business and strive to use less of everything.

Do you like taking long, hot showers? I am sure the Germans do too, but they don’t. Most take what we refer to as navy showers. They get in, turn on the water to get wet and then turn it off, soap up, then turn on the water again just long enough to rinse off.

You also won’t find them idling their automobiles. If they are, say, caught at a train crossing, they will put their car in park and turn off the engine until the train has passed. If we all practiced resource conservation like the Germans, the planet would be a lot better off.

Hopefully, you learned a thing or two about one of our closest European friends. There are a ton of other idiosyncrasies related to Germany, and you would have to live there to experience many of them. After living there for four years, I highly recommend a visit. And if you can’t visit Germany, you can always grab a six pack and a bag of pretzels and watch Das Boot. It’s the next best thing to being there.

Neuroscientists don’t know precisely what brain circuits control wakefulness and sleep, nor exactly how drugs for general anesthesia affect those circuits. But a new study from Penn Medicine researchers brings neuroscience a step closer to solving that important conundrum. A team of researchers from the Perelman School of Medicine at the University of Pennsylvania, in […]

Researchers from the Universitat Oberta de Catalunya (UOC) and the technology center Eurecat have developed an innovative formal representation of rare disease data, including information unavailable in current models on rare disease patients’ biological, psychological and social profile. For their research, the researchers have obtained data on 25 patients from organizations such as Eurordis, the […]

Researchers at Washington University School of Medicine in St. Louis have identified a molecule that protects mice from brain infections caused by Venezuelan equine encephalitis virus (VEEV), a mosquito-borne virus notorious for causing fast-spreading, deadly outbreaks in Mexico, Central America and northern South America. As the climate changes, the virus is likely to expand its […]